Or, where the hell has that Lazydog been?

Make yourself comfortable, this is going to be a long one. Grab a cup of coffee or something, ok?

For the last seven months, according to the in-game age meter, I have logged over 800 hours playing GuildWars. GuildWars is known as an mmorpg – a massive multi-player online role playing game. It is without question it is the most seductive and addicting series of games I’ve ever played. When I say series, I mean there are three versions of the game plus an expansion. One can start with any one of the three, and once your character reaches a certain level, “map travel” to any of the other two or the expansion, if you have them installed.

A friend who plays all kinds of games of that type – World of Warcraft, Never Winter Nights, Oblivion – introduced me to GuildWars. I was at his house one day and his wife showed me the game. They’d just gotten the three versions (known as campaigns) in a multi-pack from Sam’s Club for $50. Later that day, I handed him $100 and told him to go back to the store and get me two sets. Since Mel and I had played Diablo2 together for a number of years, I was sure she would be interested and it would be something we could play together since we hadn’t done any of that kind of gaming together in over a year. 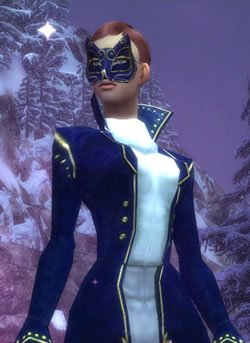 I installed the games and played for a bit. The 4 year old laptop I was using was struggling and eventually bit the dust. I didn’t have desktop computers that would run the game; those were 7 years old and had been purchased then Diablo2 came out, for that reason. Since it was till summer and I was busy, I took a break for a while. Then in late August I got a hoopty new latop courtesy of my employer and reinstalled the game software. Oh, this was SO much better!

This game is typical of its genre in that you choose a character class (profession) and then work towards building it by way of leveling up, gaining additional skills and equipping your “toon” with increasingly better armor and weapons. I’d chosen a mage type character, a domination-magic-based, staff-fighting profession called Mesmer.

GuildWars is visually stunning, the graphics are the best I’ve seen in a game of its type and that’s what initially attracted me to it. The game scenery is amazing. In most parts of the game, the game soundtrack is awesome, hauntingly beautiful music. The game can be played in many, many ways with the primary being player-vs-environment (PVE); the role playing aspect where your character follows the storyline by completing quests and missions. You can play with other players by forming parties or you can use non-player characters (NPCs) to move through the game. Aside from this, there is player vs. player (PVP: one on one, four on four), guild vs. guild, alliance battles, in-game games, just plain wandering around killing monsters, and more. Something to suit everyone. While not as large as WoW, GuildWars has about 4 million players.

The social aspects of the game are great and I’ve met many nice people from all over the world. I have some 45 people on my friends list and there’s usually always someone on to play with. I’ve joined a guild and my guild leader has helped me through many difficult parts of the game. In return, I’ve helped him recruit for the guild. I’ve also learned a bit about role-playing, not something I’d ever really done, and now my character has a life of her own.

I’ve tried to interest Mel in the game but she has pronounced it too complex. Though she has promised to try again at some point, I am not hopeful because there’s a fairly steep learning curve and computers cause her anxiety as it is. I do wish that she’d play with me though because in our earlier years together we used to play other computer games together on winter nights and they were some of my favorite times.

By October, I was hooked hard core and now play on a daily basis, often for many hours a day. Not only has this blog been dark as a result, I am not proud to report that many other things have suffered as well. Sleep has suffered and with it my committment to taking my dietary supplements (because I can’t get the timing right anymore) and getting any sort of exercise. Work has suffered as I drag myself through the days, often too tired to be much more than minimally productive. Mel has suffered, literally becoming a gaming widow. Her emotions regularly cycle between disgust, annoyance, anger, resignation and occasionally, encouragement, when it suits her to have me at home on the couch and pacified.

THIS IS BAD, VERY BAD. I KNOW. So, what the fuck am I doing? I’ve given this some thought…

I’ve always claimed to not have an addictive personality but I really do. I was addicted to cigarettes for years, I’ve been addicted to sweets, I’ve been addicted to other games. This time around the game came along right after I’d been immersed in multiple sclerosis research. I’d spent a few solid months consuming much that the internet had to offer about the disease and trying to decide what my best options were. I made decisions and began to work my plan. Once that happened, the need for the rabid research was gone and I got tired of defining myself as someone with ms. After a while, I felt better and felt like what I was doing had the potential to work. However, I was still experiencing symptoms and would occasionally run up against my limitations, which is and has been depressing.

At the same time I was developing a different online persona in the form of this game character. She could be anything I wanted her to be and clearly, she is a fit, kick-ass fighter who does not have ms. For the most part, the people I play with in game do not know this about me and even if they do, since they don’t know me in real life they have no reason to feel sorry for me the way my friends and family have.

This is the height of escapism and I have loved every minute of it. Given that depression can be an actual symptom (depending on the area of the brain affected) as well as a reaction to having the disease, the game has been a great distraction from that depression. Perhaps I’d have been more depressed if I’d not had the game, though I don’t know.

I understand now why people used to call the game EverQuest “EverCrack” – GuildWars is also that addicting. Except now I am having trouble stopping and I NEED to stop. Never mind that I don’t want to, I need to. I need to catch up on three months worth of Quicken entries and do my taxes, I need to clean my house, I need to exercise regularly (or I’m never going to be able to hike the Burren when we go back to Ireland in June), I need to catch up at work, I need, I need, I need…

I may need to remove the computer from my house for a while though I’m not sure that’s the answer because it would be every bit as tempting in my office. Regardless, the self-bargaining process begins… any ideas for me?