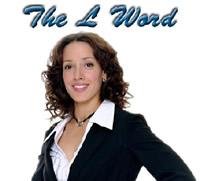 You are a Soft Butch with very high self esteem. You are always up to date on your surroundings and you are very in control of your life… or you think you are. Lots of people look up to you and think you are very intelligent. You have to be very careful not to make a one mistake because it could ruin your whole life!

Which L Word cast member are you?
brought to you by Quizilla

Stolen from Tracy, who stole it from someone else.

Hmmmm… Well, *I* wouldn’t cheat on my girlfriend, get dumped and pretend to drown myself in a pool. Nor would I ever be as unprofessional as I’ve seen her be – acting all wacko because I have a contract.